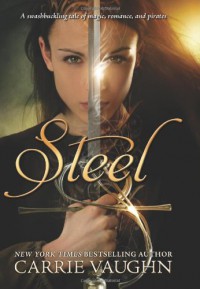 After she loses out on competing in the Olympics, Jill's parents try to comfort her with a vacation to the Bahamas. But instead of having a nice, relaxing time, Jill finds the tip of a rusty rapier buried in the sand--and is abruptly transported back to the early eighteenth century. Now her biggest concern isn't how to win her next fencing bout, but how to survive on a ship of bloodthirsty pirates.

I really liked this. Jill is a very physical character, who works hard and takes pride in her muscles. She's smart and has a good moral center, too. I particularly liked her reactions to the 1700s: her shock at encountering slaves and slavers, her horror at the paucity of medical care, how hard she found the work.
Tweet