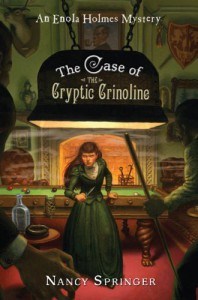 On her fourteenth birthday, Enola Holmes (youngest sibling of Mycroft and Sherlock) woke to find that her mother had left in the night, leaving behind only a series of cryptic clues. To avoid being sent to boarding school, Enola flees her brothers' care and heads to London, where she alternately looks for her mother and solves mysteries. She is adept at interviewing witnesses, constructing disguises, and cryptography, yet she is still just fourteen. When her deaf old landlady (who has filled a mother's role for Enola) is kidnapped, Enola springs into action. She will stop at nothing to discover what happened to Mrs. Tupper and get her back.

Another wonderfully engaging adventure for Enola, rife with delightful historical details (like Mrs.T's pride in her window, though it costs her window taxes) and great interactions between Enola and Sherlock Holmes.
Tweet