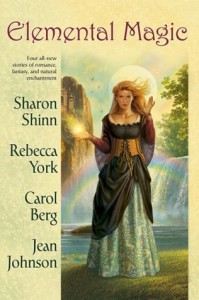 A collection of four "paranormal romance" novellas. In order of descending suckitude:
Rebecca York's "Huntress Moon" is awful. In a modern world disturbingly similar to Robin McKinley's [book: Sunshine], a young noble virgin sacrifices her freedom to buy medical treatment for her mother. She is sold as a sex slave to a werewolf. Oily sex ensues; apparently it's not rape if she comes. Three days later, they get married. Gah!
Jean Johnson's "Birthright" is a mediocre story about two twins trying to find out which one inherits their kingdom. The world building and characters are lightweight enough that the entire thing could have been easily cut in half.
Sharon Shinn's "Bargain With the Wind" is a faintly creepy take on the tale of Cinderalla. A mysterious, beautiful woman marries a man recently come into his title, but as time goes by the housekeeper slowly realizes that there is more to the story than it seems. With better writing or a less saccharine ending, this could have truly packed a punch.
Carol Berg's "Unmasking" is by far the best, although again, the ending is weak. A young woman has repeatedly failed the final wizard trials. Her last chance to claim her title is to convince a spy that the wizards are less powerful than they seem. I was intrigued by the world here: demons roam the earth and possess those who don't protect themselves properly, making them perform acts of cruelty or harm. The wizards roam the world, dislodging demons and protected the possessed from the vengeance of their victims. Because those without magic are easy prey for the demons, there are rigid laws prohibiting them from anything that would let them do harm: they can't make anything permanent (even a quilt or a house), for instance, lest a demon take control of the object; they only have a few years of schooling; they are moved at the whim of the wizards. I liked reading about hte interactiou between one of these powerless people (a humble woodsman, who has to hide his little carved trinkets) and a rather downtrodden, but nevertheless privileged, wizard.
Tweet