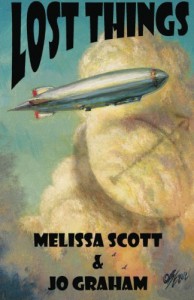 A decade after WWI, the remnants of a magicians' lodge sworn to defend against evil has fallen on hard times. Mitch and Jerry were physically injured, and the loss of their beloved leader has left them adrift. But when an archaeological dig frees an ancient evil, they must once more oppose it.

Very historically accurate, but astonishingly slow and tedious. If the portions of this book that related to the evil and the lodge's efforts against it were excised, the book would probably only be about 20 pages shorter, if that. The vast majority of this book consists of Alma, Mitch, Jerry and Lewis eating, dressing, or traveling. Loooong stretches of them piloting various aircraft. Entire chapters about their efforts to get a nice dress for Alma. Meanwhile, a demon is jumping bodies all over the world, but don't let that get in the way of the characters' ruminations over coffee! If this book had a drinking game, you'd die of alcohol poisoning from the number of times Jerry says "Oh, I should research a way to defeat this demon" and the other lodge members say "oh no, you're too tired, go to sleep." They never do anything! They just get on various conveyances (a plane! a train! a dirigible!), and then at the end they stumble upon a deus ex machina (literally) to solve their problems.

Very frustrating. I would have felt more kindly about the slow plot if the characters and their interactions were strong, but they just repeat the same thoughts and feelings over and over.

The sentences themselves are well crafted, and I was impressed by the authors' knowledge of the 1920s and aircraft. But there was nothing here to hold my interest.
Tweet